Major changes to the way income from property rentals is taxed could see some people paying up to three times more. We do the maths.

The amount of tax owed by many buy-to-let landlords will double or even triple as a result of changes being phased in from April, it was claimed this week. Some landlords enjoying four-figure net annual profits could end up nursing losses – and if interest rates rise this will make the situation even tighter.

It was in July 2015 that George Osborne mounted a surprise raid on mortgage tax breaks. He announced a cut in tax relief on mortgage interest payments for buy-to-let landlords, with the changes phased in gradually between April 2017 and April 2020.

So what’s happening?
At the moment, landlords can deduct mortgage interest and other finance-related costs from their rental income before calculating their tax liability. But this interest relief is being slashed from 100% to zero.

What will happen instead is that the income tax on someone’s property profits and any other income sources will be totted up, and then they will be granted a “tax credit” worth 20% of the mortgage interest cost to offset against income tax, whatever rate of tax they pay.

Some experts have claimed this tax change, which might sound arcane and is made extra-complicated because it is being phased in, will have a devastating impact on many landlords’ finances. It only affects individuals who own rental properties in their own names.

How many people does it affect?
It’s difficult to come up with a comprehensive figure because every landlord’s circumstances will be different.

The Treasury says HM Revenue & Customs has estimated that “only one in five landlords will pay more tax as a result of this measure”. However, organisations representing landlords have rubbished this claim.

There could be unpleasant knock-on implications for some people. For example, it might mean that some landlords with children will be dragged into the “high income child benefit charge” regime, where child benefit is clawed back via the tax system if a parent has an income of more than £50,000.

Give me an example of how it will work
The table below shows how the tax change might work in practice. It tracks what could happen between now and April 2020 when the new rules will be fully in place. The table has been put together by Anna Sofat, who runs financial services boutique Addidi Wealth, and it is based on a higher-rate taxpayer who buys a £350,000 property with a £280,000 mortgage that has an interest rate of 3.5%. This example assumes a rental yield of 4%. 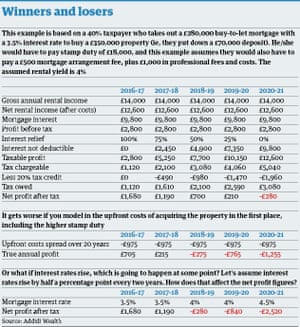 For the sake of simplicity, our Mr/Ms Example’s net rental income (£12,600 a year) and the mortgage interest they have to pay each year (£9,800) have been kept the same throughout.

However, this is arguably too upbeat in that it doesn’t factor in the upfront costs of acquiring the property, including the new higher stamp duty on buy-to-lets. Addidi Wealth says it is reasonable to deduct £975 a year from the annual net profit to reflect these costs, and once you do that the losses get a lot worse a lot more quickly.

If the mortgage is on a variable rate, a rise in interest rates would further eat into profits. If we assume the mortgage interest rate gradually rises from 3.5% to 4.5%, that would also result in a thumping loss, as shown in the table.
“This example provides insight into a previously profitable venture that becomes loss-making, that will need to be bailed out down the line, either by higher rental yields or large property price rises, neither of which are certain,” says Sofat of her table.

The new rules that will make it harder to borrow

Tough affordability rules for buy-to-let mortgages that take effect on 1 January mean the figures will no longer stack up for many wannabe landlords, writes Rupert Jones.

The new tests will in some cases massively reduce the amounts landlords can borrow. For example, someone who would currently qualify for a £190,000 buy-to-let mortgage could find themselves limited to £150,000 under the new regime. Many of those who find themselves in this situation would probably have to abandon their plans because they wouldn’t be able to find the extra cash for a much bigger deposit, or whack up the rent by enough to bridge the gap.

The clampdown on affordability, which is separate to the tax increases on buy-to-let properties, is designed to ensure that borrowers could cope in the event of a chunky rise in interest rates. The Bank of England has previously expressed concern about the landlord mortgages sector, saying that buy-to-let borrowers “may be more vulnerable than owner-occupiers to an unexpected rise in interest rates or a fall in income”. Its big fear is that if there were a mass sale of buy-to-let properties, this could undermine financial stability.

As a result, governor Mark Carney toughened up the “stress test” that buy-to-let mortgage applicants must undergo. From 1 January, lenders will have to check that an applicant could still afford their mortgage if interest rates shot up to 5.5%. However, this particular stress test will not apply if the customer is taking out a mortgage fixed for five or more years, so perhaps we will see a bigger take-up of such deals.

Some lenders, including the Mortgage Works, have also used this as an opportunity to reduce their maximum loan to value – in its case from 80% to 75%. In other words, it is now demanding a minimum 25% deposit in addition to all the other requirements.

So how will the changes affect landlords? It’s best illustrated with an example (courtesy of brokers London & Country). Let’s take the example of a property generating £1,000 in rent a month. At present, using a 5% interest rate figure and a 125% rental cover figure, a landlord could borrow £192,000. But once you increase those figures to 5.5% and 145% respectively, the amount the landlord could borrow tumbles to £150,470.

“The tightening in lending criteria, to ensure there is no slip in lending standards, will mean that landlords require a higher rent to support the borrowing,” says David Hollingworth of L&C. “This should give them better ability to deal with changes in costs, and the stress test is designed to account for interest rates rising in the future. However, there’s a sense that the pressure hitting landlords from different angles, and all at once, will put upward pressure on rents.”

The Bank of England has said that in order to avoid existing borrowers being adversely affected when remortgaging, the new rules won’t apply to buy-to-let remortgages where there is no additional borrowing beyond the amount outstanding under the existing contract.

Landlords are creating limited companies in a bid to avoid higher taxes on their rental incomes when new rules on mortgage interest come in in April, writes Hilary Osborne.

Research from lender Kent Reliance found that 100,000 limited company loans were taken out in the first nine months of the year, more than double the figure for 2015. Meanwhile the Residential Landlords Association said 40% of its members had considered changing their status, but that 80% of those had decided it was not the best thing to do.

Michael Wright, director at property tax specialist RITA4Rent, said his firm had seen a large number of landlords asking for advice on whether to hold their properties in a limited company rather than in their own name.

Holding a property in a company means a different set of tax rules. Instead of paying income tax on the rent, the money goes into the company which is then liable for corporation tax. The rate is currently 20%, but by 2020 that will drop to 17%. For a 40% taxpayer, or someone on the highest rate of 45%, this could mean a big saving, although a company does not receive a personal allowance before tax kicks in. Mortgage interest and finance costs are considered allowable expenses inside a company, so landlords can then offset them against their rental income.

Lenders have cottoned on to the trend and are increasingly willing to offer mortgages on this basis. Ray Boulger of broker Charcol says: “A year ago you would have had relatively little choice of lender and you would’ve had to pay more. Now, several lenders are charging the same rate. Some charge a higher fee, but if that’s £500 it is not much compared with the savings you will make.”

Setting up the company is inexpensive, with online services charging less than £100 to do the basic work. But while the process is straightforward, deciding whether it is the right thing to do is not. First, says Wright, landlords need to consider whether it is worth transferring any existing properties. “A company is a separate legal entity, so if you want to move a property into one you have to sell it to it – this may attract the new higher rate of stamp duty and, depending on how much the property has increased in value, could trigger a capital gains tax bill.” For landlords who have seen big growth in the value of their properties, this expense could offset the benefits of the move.

Some landlords will opt to only use a company for any new properties they buy, but if they want to take an income they may find themselves liable for tax on dividends. Wright adds a cautionary note to landlords who do go down this route. “We can’t rule out the government launching an attack on landlords holding properties in a company – they may one day say, ‘Why are two homes on the same street both being rented out and taxed differently?’” he says.

Stuart Law of Asssetz Property adds: “On paper incorporation looks like a great idea. However, when it comes to the practicalities we’re not sure landlords will do it. The cost of transferring properties means that for many it is simply not worthwhile. For new purchases though, it can be worthwhile.”

Kent Reliance says there will be other measures landlords could take to mitigate the impact of the tax changes:

• A third of landlords said they planned to increase rents in the next six months, by an average of 5.4% (or £571 a year). This will mean paying more tax too, and landlords may find that the market will not bear any more increases.

• Transferring ownership would allow landlords to avoid tipping their incomes into the 40% tax bracket. But if the property is mortgaged it could result in a stamp duty bill, which is based on the share of the mortgage that is transferred. There could also be a CGT bill.