London’s landlords gained the most from their rental properties last year thanks to fast-rising prices in the capital, but buy-to-letters looking to start or expand portfolios now may do better by looking north, according to a study.

Data from Kent Reliance’s latest Buy to Let Britain Report shows the capital had the highest average annual total return at 15.1 per cent. This is the gain in the property price over the 12 months to March plus the rent it provided in in that time.

However, those looking to secure the best return for their money now could do better by looking to areas in the North of England instead.

This is because the rental yield on buy-to-let properties is higher there. This is the total rent achieved in a year as a percentage of a property’s purchase price.

The yield on the average London rental property is 4.3 per cent, while the corresponding figure in the North West is 7.1 per cent – more because property there is cheaper to purchase in the first place while rents are relatively higher.

For property investors, however, this is still not the complete picture. Rental yield may indicate the areas where the underlying case for investment is the strongest, but it does not take account of future growth, or falls, in prices.

For most landlords, this capital growth was the biggest component of their total return last year, albeit a paper profit that requires a property to be sold in order to be realised.

After London’s total return of 15.1 per cent, the next most lucrative regions for landlords were the East of England at 13.6 per cent and the South East at 13.3 per cent.

The average across the UK was 12.5 per cent, equ 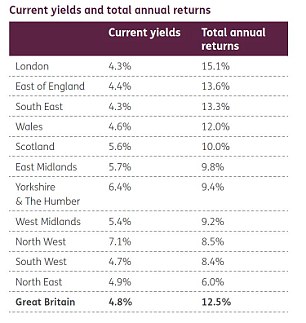 The rise in property prices over the past 12 months has pushed rental yields down. Over the past year average yields have fallen from 5 per cent to 4.8 per cent.

You would have found the highest in the North West, at 7.1 per cent, and Yorkshire and Humber, at 6.4 per cent.

Kent Reliance predicts the number and value of rented households will keep increasing due to a lack of supply of new housing and rising prices and rents.

The lender says the sector is worth £990billion and predicts it will keep growing and increase to 5.5million households by 2020.

The sector grew by almost 150,000 households in the year to March, accounting for 77.4 per cent of all new households at 4.8million.

It also claimed rising house prices and increasing rents have also made it easier for landlords to add to their portfolio.

According to the report, landlords will be able to raise enough profit to pay for a deposit on a new property within ten years, just from gains in their property’s value as long as house price growth outstrips GDP by 1 percentage point.

The table below estimates how long it could take to have enough equity in a property to remortgage and make a new purchase based on how much house price growth exceeds GDP.

It assumes an average loan-to-value of 71.8 per cent and estimates how long it will take to accrue enough equity in the home to stump up another 28.2 per cent deposit based on how much prices may rise.

Click here to read the original article: “London landlords gained the most last year – but if you want to start or expand a buy-to-let empire now it’s time to look North”